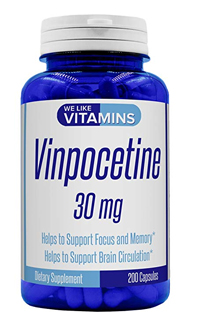 Top brain enhancements aim to boost brain performance by providing it the right nourishment, boosting oxygen flow and preventing it from untimely deterioration with the help of several well-known ingredients. One such supplement Vinpocetine is a synthetic compound derived form a natural extract from the leaves of the lesser periwinkle plant.

Developed in the late 1960s, this compound is sold as a prescription drug in several European countries but included in dietary supplements in the US. Although known for its role in boosting the blood and oxygen flow to the brain, the customer reviews of this compound have revealed certain side effects. Read on to know more about its benefits and the precautions to be taken.

Vinpocetine: How Does it Work?

Widely used as a cognitive performance booster, this compound works to increase the blood flow to the brain while offering some protection to the brain cells against injury. Supplements containing this compound are used to treat people with Alzheimer’s disease. Vinpocetine appears to interact with   several ion channels which results in a suppressive effect on neurotransmitter release thus protecting the neurons. Some manufacturers combine this compound with Ginkgo Biloba and market it as a memory booster.

The man-made compound is also used to prevent and reduce the chance of disability and death from ischemic stroke that occurs due to the stoppage of blood flow to the brain following a clot. Some other uses of this compound include treating symptoms of menopause, chronic fatigue syndrome and seizure disorders besides preventing motion sickness. Large doses of Vinpocetine also bring out its PDE1 inhibitor qualities which make it cardio protective and cognitive enhancing, according to some studies.

This compound was initially developed for the treatment of neurological diseases associated with stroke and dementia, but in recent years has also been found to be useful in treating degenerative neuronal disorders such as Parkinson’s, Alzheimer’s and Huntington’s disease. This supplement not only boosts brain blood flow by acting as a cerebral vasodilator but also enhances cerebral metabolism by boosting the uptake of oxygen and glucose. It also functions as an antioxidant and prevents the elevation of neurotoxins in the brain.

Precautions to be Taken

This compound is generally safe for consumption via mouth or as a shot when given under the care of a health care provider. It offers neuro protection against toxins and excess stimulation while reducing neural inflammation when consumed orally. This powerful memory enhancer can, however, lead to certain side effects like stomach pain, nausea, sleep disturbances, headache, nervousness and dizziness in some people. Like all other brain supplements Vinpocetine is also not recommended for use by pregnant and lactating women. People with blood clotting problems should also avoid this supplement.

Experts also recommend that people with weak immune systems, those with advanced HIV infections or the ones taking immune suppressive drugs should consult a physician before taking this brain booster.

The recommended dosage of is 5-10mg three times a day with a maximum dosage of below 60mg considered safe. This dose range is suitable for neuro protection, enhancing cerebral blood flow and reducing the rate of cognitive decline. It is advisable to always follow your doctor’s instructions when taking a supplement. Also remember that the absorption of this compound increases when it is taken with meals.

Can you give your opinion?

How we keep the lights on - This site may receive a finders commission should you purchase from a manufacturer's website having clicked on a banner here on this site. The price you pay is always the same. We may post promotional offers from manufacturers whose products we have reviewed. This finders reward helps keep the lights on.